Is The Gamechangers Movie Telling You The Truth?

As many of us do over the Christmas / New Year break, I like to catch up on books or movies that I've been meaning to get in to over the year.

I had heard about The Gamechangers Movie but hadn't had a chance to watch it. Coincidently, a few weeks ago the Joe Rogan podcast interviewed the producer of the movie, James Wilks.

What I do like about Joe Rogan, is that he tries to provide both sides of a particular argument or topic. In this case he also had Chris Kresser on, a globally recognised leader in the fields of ancestral health, paleo nutrition, and integrative medicine.

So incidentally, I watched the podcast before I had watched the movie. I would like to think I was still impartial when I finally watch the documentary on Boxing Day. Although I'm kind of glad I watched both, as otherwise I think I would be taking the documentary on purely face value. It's incredibly well done, slick and has a host of highly creditable and lauded international Phd's, doctors, nutritionists, and athletes.

This however I believe is the biggest issue with the documentary, as you'll learn more about as youread on. 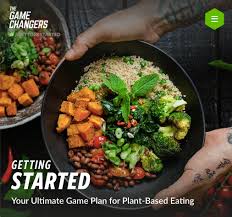 What Is The Gamechangers Movie?

The basic premise of the documentary is to prove firstly that a large proportion of humans across the centuries, and even for 1000's of years, have predominantly survived on a plant based diet, and secondly that humans were not necessarily designed to eat meat and don't need meat for our protein needs.

I would like to think that it's not an anti meat lobby, but it comes across like this in this respect. The other major premise behind the movie is that plants are good for us. I have no particular argument with this, and the science is solid. I actually don't have an opinion if meat is bad for us either, and that we should only be eating plants.

I simply don't know enough about the science, and I can only go by my own anecdotal evidence with trialling various levels of a plant based diet. In fact I really like the idea and I'm currently furthering my research and considering how far I go with a vegetarian diet myself. The official website actually has some really cool recipes.

The One Sided Commentary

The movie does a great job and using experts and professionals with exceptional credentials to argue the "plants are better" premise.

I'd have to agree that it is indeed hard to argue with what they put on the table. What I do have an issue with, and this is what Chris Kesser alluded to, was the completely one sided partisan production of the movie. It was obvious that there were no meat eating proponents in the documentary. No nutritionists or doctors that are proponents of a meat based diet, or at least a balanced diet were interviewed, nor were any paleontologists who differed in opinion to the history of humans predominantly eating plants.

In effect, the movie could be classified in my mind as propaganda. The producers, and particularly James Wilks have severely let themselves and the public down in this respect, and it's insulting that they think or hope that no one notices. Like I said I have no issue with the health benefits of a plant based diet, but at least give the alternative argument some consideration.

I do believe that they know that they made a mistake here, but are doubling down. On the Joe Rogan podcast, Wilks was extremely animated in defending the movie and would not concede it was one sided. To me it's unfortunate, as the other important and credentialled information in the documentary is extremely important and critical to all of us to live a more healthy life.

You can watch the podcast debate below.

To find out more about the movie you can visit the website here or find it on Netflix: https://gamechangersmovie.com You can watch the trailer below:

If you watched the movie I'd love your opinions. Feel free to comment below.

There are many protein shakes available, and if you drink them, you might wonder if your kid can try them too. Howe...
Read More

The Cookie Diet is a diet that has been around for over 20 years, and it is still popular in Australia. The diet enco...
Read More

What Is the Best Vitamin C Serum (Australia)?

Vitamin C is known worldwide for being an excellent method for providing more glow to your skin, as well as reduced r...
Read More